This technical article was written for The Data Incubator by Paul Paczuski, a Fellow of our 2016 Spring cohort in New York City who landed a job with our hiring partner, Genentech as a Clinical Data Scientist. 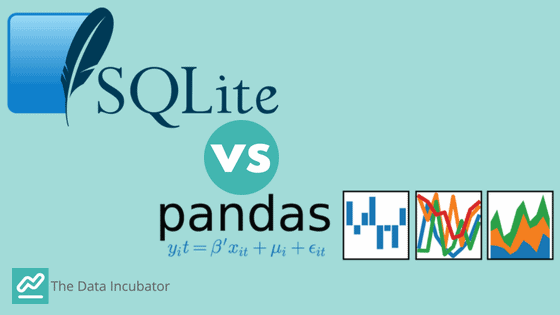 As a data scientist, we all know that unglamorous data manipulation is 90% of the work. Two of the most common data manipulation tools are SQL and pandas. In this blog, we’ll compare the performance of pandas and SQLite, a simple form of SQL favored by Data Scientists.

Let’s find out the tasks at which each of these excel. Below, we compare Python’s pandas to sqlite for some common data analysis operations: sort, select, load, join, filter, and group by.

Note that the axis is logarithmic, so that raw differences are more pronounced.

For the analysis, we ran the six tasks 10 times each, for 5 different sample sizes, for each of 3 programs: pandas, sqlite, and memory-sqlite (where database is in memory instead of on disk). See below for the definitions of each task.

Our sample data was randomly generated. Here’s what it looks like:

This consists of a random string of 8 characters, a random single character (for the filtering operation), a random integer simulating a year (1900-2000), and a uniform random float value between 10000 and 100000.

sqlite or memory-sqlite is faster for the following tasks:

pandas is faster for the following tasks:

Comparing memory-sqlite vs. sqlite, there was no meaningful difference, especially as data size increased.

There is no significant speedup from loading sqlite in its own shell vs. via pandas.

Overall, joining and loading data is the slowest whereas select and filter are generally the fastest. Further, pandas seems to be optimized for group-by operations, where it performs really well (group-by is pandas‘ second-fastest operation for larger data).

Note that this analysis assumes you are equally proficient in writing code with both! But these results could encourage you to learn the tool that you are less familiar with, if the performance gains are significant.

All code is on our GitHub page.

Below are the definitions of our six tasks: sort, select, load, join, filter, and group by (see driver/sqlite_driver.py or driver/pandas_driver.py).

sqlite is first, followed by pandas:

self._cursor.execute(‘SELECT * FROM employee WHERE dept = “a”;’)

To learn more how sqlite works, check out this awesome blog series.

Here is a syntax comparison between pandas and sql.

Pragmatic Institute is one of the world’s largest and most-respected product and data training companies on the market. In addition to offering instructor-led online and in-person training, the company also provides hands-on practice, templates and access to an alumni community where professionals can connect with peers around the world. With nearly 30 years of experience in the industry, Pragmatic Institute has successfully trained more than 200,000 professionals at 8,000 companies across six continents.

How To Say No: A System for Evaluating Opportunities

We fell in love with these products. Here’s why. Former Vice President of Products, Games and Interactive for the Walt Disney Company